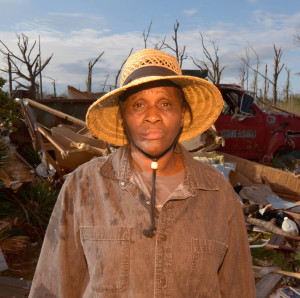 How long does it take to lose everything? Seconds…

Martha Hall, 84 years old, and her daughter Martha Gardner were on their way to deliver Christmas pies when all of a sudden the ground seemed to explode. Debris was flying everywhere. Theylooked up and saw a fireball in the sky. They then put their heads in their lap and began to pray. “I’ve never seen anything like it! We looked straight into the eye of this horrifying tornado — it was the most terrifying moment of my life. When we finally had the courage to open our eyes our house was gone. I just knew my brother and husband were gone too. Then somehow miraculously they walked out of the rubble.”

The roar was deafening…

Robert Hall walked out of his bedroom and into the den. Glass shattered everywhere. To protect himself he laid on the floor. An insane wind obscured his vision. Within seconds he started to feel the rain. He looked up into the tornado and realized his house was gone. Miraculously he was still alive.

On December 23, 2014 Gov. Phil Bryant issued a state of emergency for Marion and Jones counties, along with other parts of the state affected by severe weather. This is the deadliest December tornado event in Mississippi since the Vicksburg tornado on Dec. 5, 1952. “We all need to come together to help victims of this deadly tornado,” said Jerron Carney, pastor of Woodlawn Church. “Survivors reported that the tornado was upon them in a flash. Families scrambled for closets, bathtubs, under mattresses and tables, anywhere close that offered some semblance of safety. Within minutes, property, landscapes and vehicles were destroyed, and sadly four lives were lost; two in Marion County and two in Jones County.”